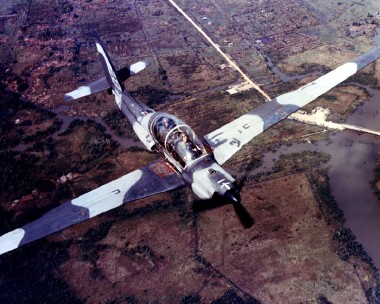 Drexel Team Member Frank Gitter served active duty in the U.S .Army as a technical observer from 1970-1972. His reserve duty ended in 1976.   Frank flew secret night missions over Vietnam from Feb. 1971 – Jan. 1972. The mission objective was to locate and direct the destruction of enemy night operations.  Now, in 2014 the Army utilizes stealth airplanes that fly high above enemy lines and use satellite imagery. In 1970 however, the planes and equipment used were completely different.  I am rather certain you will be amazed as you read more about Frank’s service in the U.S. Army.

Frank and his U.S. Army comrades flew in the Lockheed YO-3A, which is a low altitude ‘SILENT STEALTH’ night reconnaissance airplane that was developed for the U.S. Army specifically for these missions.  Dare I say one of the first stealth airplanes utilized.  It was designed to be as quiet as possible and was intended to observe troop movements in near-silence during hours of darkness.  The Yo-3A was not armed, did not have a camera. It used only visual observation.  The only protection was silence.  It was equipped with a Night Vision Aerial periscope (NVAP) and an Infrared Illuminator (IR) for observation purposes.

Of the 11 YO-3A planes produced, 9 of them flew in Vietnam over 14 months, and they never took a round of fire. The YO-3A operated silently at 1000 feet or lower. Some pilots were known to go unobserved over the enemy as low as 200 feet. The canopy on the airplane was oversized in order to get a better visual on the targets.

Frank flew most of his missions out of Binh Thuy, Vietnam, but also flew out of Long Thanh North. Frank was the technician who sat in the front of the airplane observing the enemy. Frank was responsible for clearing the flight path of friendly fire, finding the target, and calling in the fire power to destroy the enemy.

Frank’s pilot on one of his missions is a gentleman named Dick Osborne – (pictured right) On September 25, 2014 Frank and Dick reunited for the first time since Vietnam (43 years) at the Quiet Airplane Association Group’s 10th Anniversary Reunion in New Orleans, LA. While at the reunion Dick and Frank had the opportunity to share a story of one of their missions. The two of them were on one of the more important missions flown by their group during Vietnam. While on this mission they found and identified a ship as an enemy trawler, coordinated intel with other Armed Forces which had it sunk. At the time it was the largest steel hull trawler sunk since WWII. To accomplish this mission, they were flying at night, lights out, just above stall speed – that’s around 60mph and at about 800 feet above the ground. The enemy never saw them.

The true importance of these missions has been unpublished, as they were treated as secret operations. The significances of these surveillance missions has just recently been brought forward by key military intelligence.  We expect to hear more in the near future highlighting the YO-3A and their months of service in Vietnam.

Pictured right is a photograph of young Frank Gitter (age 19) in Vietnam with two of his comrades Christopher Mumpower and Emanuel Valenzuela. At the recent Quiet Aircraft Association Reunion Frank, Chris, & Manny reunited for recent updated image of them now.

Here at Drexel we are truly honored to have Frank Gitter as part of our team. We are thankful for his service, and for all who are serving and have served on behalf of the United States of America.

Cruising speed: 110 MPH, or as slow as 60 mph for maximum noise reduction

More on the YO-3A: After Vietnam the amazing capabilities of the YO-3A enabled 2 of the planes to fly 2 more years for the State of Louisiana hunting shrimp poachers. It was a highly successful program and Leo Rodriquez was honored at the recent reunion for his service by the State of Louisiana. Another YO-3A flew on until recently ending its service with NASA. Its’ silent capabilities were used to take acoustical measurement of other aircraft.