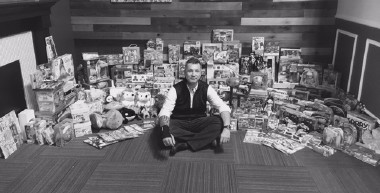 “Seven years ago I set aside a few bucks here and there for a few weeks and bought about 20 toys for “Toys for Tots”.

I did that for years… alone.

Fast forward to 2017… two weeks ago… which had me send a company wide email to invite anyone who wished to donate a toy… which I would match with $1.

The final count would create a final dollar total which I would spend on more toys.

A few days later at our SOH meeting Joel would ask me to stand up at the front of the room. I was unaware of what was happening. He proceeded to read my email out loud… and then followed it up by asking the room what they thought the company should donate to the cause. A bidding war ensued and eventually two coworkers said the same number at the same time. A third simply said ” add them two together and that equals”.

I will admit to breaking down for a minute… tears running down my face. The generosity of one who has… to give to those who have not… is a overwhelming sensation.

Today I sit among the toys… 385 toys to be exact. I also have my $385 dollar match plus $200 dollars donated to shop with yet… which should add another 40 toys or so. Toys will still come in for two more days until Thursday when the Marines come to pick them up. I will refigure my overall total then. Also add Joel’s donation of $10 thousand dollars… which is already on its way to the charity.

I sit among the toys smiling and happy… no tears. (Okay… maybe a few earlier while I counted)

A small idea… has become a huge gift.

I am humbled by the generosity of my coworkers and our flooring reps once again.

Quoting Rise of the Guardians..”This is my center”

Thank you to everyone. I cannot say it enough.

Signed: No longer the lone Elf.”

What is the Toys for Tots Program?

Toys for Tots is an amazing program ran by the the U.S. Marine Corps Reserves. Each unit collects new, unwrapped toys during the months of October, November and December. Each year the gifts and donations collected, get distributed as Christmas toys to less fortunate children in the communities. For the past few years Drexel has contributed to this program on behalf of our Team Member Robin as well as the other Marines that are a part of our Drexel Team. Drexel is proud to be a corporate donor for this amazing organization. See link below to read more about Toys for Tots.

The Marines from Toys for Tots personally stopped at Drexel to pick up our donation!