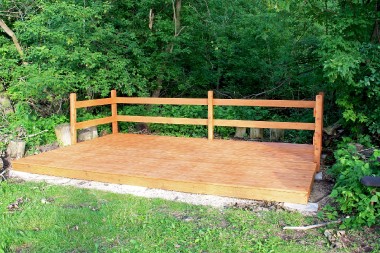 Drexel wanted to share this fantastic write-up from Local Eagle Scout Nathan Anderson. It was a honor to support this Eagle Scout Project with a building materials donation.

“Through the process of organizing and carrying out my Eagle Project, I have learned a lot about things such as planning ahead, leadership, construction, and responsibility. My project required much planning ahead in the early stages as well as some of the later stages, and at times I wasn’t able to plan for something until later than I expected, due to either a lack of required information, or uncertainty about future events such as weather and such. Leadership was also a big part of the project, as that is one of the main points in having scouts do Eagle Projects. The leadership aspect didn’t come into play very often until much closer to the actual build because until then I had been working with people rather than having them work for me, but on the day of the build I did have to lead everyone in telling them what needs to be done and how we should go about doing it. In terms of what I learned from leading the build, it wasn’t really anything that I hadn’t already learned in scouts and otherwise, it was more of just a more intense practice of this leadership. During the build I also learned quite a bit about construction from one of the adult scout leaders who had quite a lot of experience in that area. Going into this project, I had very little experience, so I was very lucky to have someone to give tips on how to build it properly, such as how the wood should be facing based on the grain and also how to use clamps or a pry bar in order to bend the wood to correct for warping. The other major point in the idea of an Eagle Project is responsibility, as the entirety of it was my responsibility to plan execute,and complete. It helped me to get a better idea of how much work and effort it takes to get this kind of project done, and how procrastination can put strain and stress into the entire process. Despite the difficulties I encountered along the way, I definitely feel like I have learned from my mistakes and if I were to do this again, I could do it much more efficiently overall.”